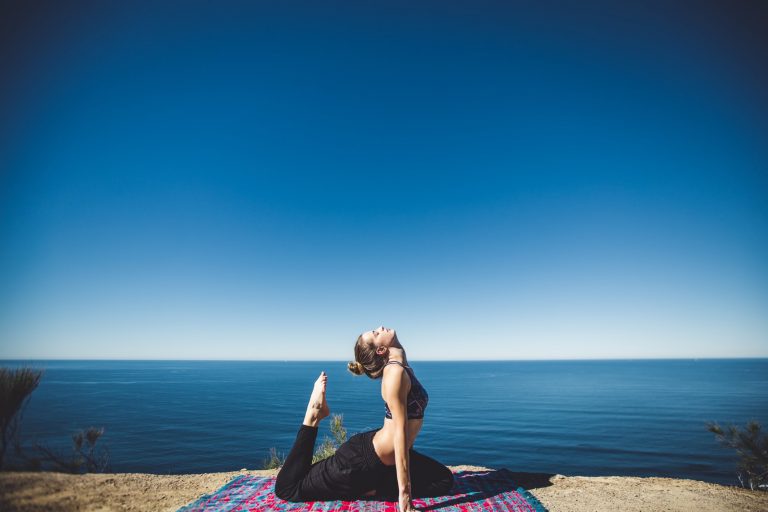 The difference between Yoga and Pilates has been written about and discussed again and again (and again) in the wellness community. This post isn’t intended to be an exhaustive checklist of differences and similarities. I’m not looking to shine a more favorable light on one over the other. It’s an appreciation of how they are related and what we can learn from each. I practice both, but eventually chose to teach only one.

We need to know what they are before we can differentiate them. To get the most objective definition of each, here’s what an online dictionary says:

I’m good with that definition. There’s more to say, but for a 19-word sentence it captures the gist of it.

“Yoga is a Hindu spiritual and ascetic discipline, a part of which, including breath control, simple meditation, and the adoption of specific bodily postures, is widely practised for health and relaxation.”

This level of complexity is often played down, especially in Western culture. It can make people feel uncomfortable. It’s a discipline steeped in religion and people often don’t come to Yoga looking for a belief system. They’re looking for a workout, a yoga body and a chance to find some stillness. But to view Yoga as a workout “is a bit like walking the stations of the cross as aerobics.” (Thank you A A Gill for the perfect quotation, this world still misses your wit and wisdom). This isn’t a criticism of people who do it just for exercise. But what they’re doing is not Yoga.

Yoga is thousands of years old and if it’s practiced to its fullest, is a holistic lifestyle. It exists in hundreds of diverse incarnations and styles. On the other hand, Pilates was devised in the early 20th century by Joseph Pilates and originally went under the name of Contrology.

Joseph Pilates designed a system of exercise that is underpinned by a number of principles, including concentration, precision and control. His thesis, Return to Life Through Contrology, outlines how his system creates an optimally healthy life. He believed his method gave rise to “complete coordination of body, mind, and spirit.” It’s a clever and forward-thinking piece of work. It places emphasis on how modern life presents us with challenges we need to overcome to maintain our health. Its relevance to our day-to-day existence is hard to dispute. The use and sophistication of Pilates studio equipment like the reformer is also unique and there’s no universal equivalent in Yoga.

I’ve often heard teachers in the Pilates world are keen to stress that Pilates is more technical or more anatomically minded. This isn’t always a fair assessment. Yoga can be incredibly technical. Like any physical discipline, it depends how you learn it. Find a style and teacher that meets your “technical” standards and go with that.

Despite the big differences in how they came to be, there are important similarities. Both are what I call “practices”. I have a Yoga practice and I have a Pilates practice. By practice, I mean a repeated application of a method. The methods are different, but the discipline of showing up, being present and working through each system is the same. I learn different things from each, all useful in life. The spiritual depth of Yoga and its principles of non-attachment serve me just as well as the physical strength-building challenges of the classical reformer Pilates repertoire.

Yoga and Pilates can be meditative in equal measure. The effect of movement and exercise in helping to clear the mind is widely recognized. Both disciplines lend themselves to this. The necessary awareness needed to execute the movements creates a sense of mental stillness.

Of course, there are the more superficial similarities. There will be stretching and toning in both. Some of the exercises may be the same. Go to a gym and you’ll be doing both on the same mats. With a dedicated approach, both can build strong, limber bodies.

Back to the title: are Yoga and Pilates sisters, cousins or unrelated. I’d go with second cousins. The genesis of each is too disparate for them to be closely related. Yet we are in a place where we can appreciate that there are similarities around how and why they’re practiced and some of the exercises themselves. So whilst they look and sound different, they’re still in the same family.

I chose to teach only Pilates. This reflects my belief in the method, its increasing relevance and the logic that underpins it. It doesn’t mean I’m any less dedicated to Yoga. My Yoga practice is very personal and private. They both enrich my life in different ways and hopefully also enrich yours.

0 replies on “Pilates and Yoga: Sisters, Cousins or Unrelated?”

back to blog
Menu